This week, the Department of Homeland Security (DHS) issued a terrorism threat warning of “an enduring threat to faith-based communities, including the Jewish community.” We deeply appreciate President Biden’s leadership on this issue and his commitment to combating antisemitism and hate throughout his presidency. At this inflection point, Donald Trump and the party he leads have undoubtedly fueled the fire of antisemitism burning across the United States. As President Biden said earlier today, silence is complicity in hate.

Make no mistake — Trump is responsible for legitimizing and emboldening antisemites, and the failure of Republican leaders — including the Republican Jewish Coalition (RJC) —  to explicitly condemn and repudiate his vile actions makes them complicit.

All eyes are on the Georgia Senate runoff, which is just four days away. As we look to Georgia, it’s clear that Trump’s anointed candidate, Herschel Walker, who has used antisemitic tropes in campaign emails, has an antisemitism problem. As Jewish historian Ethan Katz wrote, “Whether or not Herschel Walker is personally antisemitic, he is more than happy for the antisemites to believe that he is an antisemite. And that, to put it mildly, is not good for the Jews.” This is just one reason why we must ensure Walker is defeated and Sen. Warnock is elected on December 6. 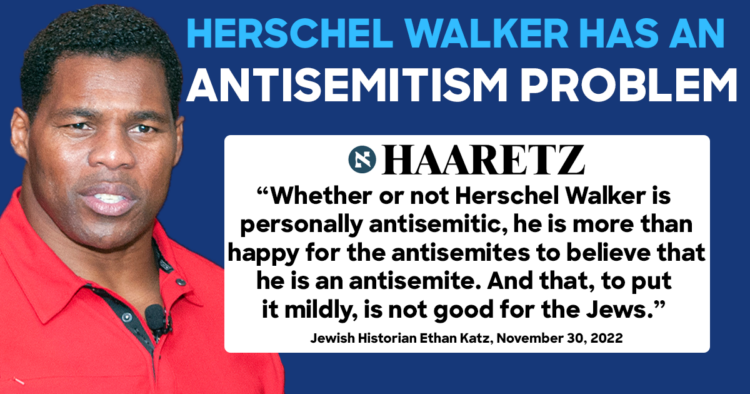 What’s good for the Jews, Georgians, and all Americans is re-electing Senator Raphael Warnock. We’re getting out the Jewish vote for Sen. Warnock to reject Walker’s extremism and to support a true champion of our values. Join our phone and text bank on Monday, December 5 at 5:00 p.m. ET/2:00 p.m. PT, featuring political commentator Brian Tyler Cohen for a conversation with Michigan Governor Gretchen Whitmer and Pennsylvania Governor-Elect Josh Shapiro.