As we mark one year since the deadliest attack on Jews in American history at the Tree of Life synagogue in Pittsburgh this Sunday, Jewish Americans continue to feel the impact of rising anti-Semitism and the emboldening of white nationalism during the Trump presidency. According to a poll released this week by the American Jewish Committee (AJC), nearly nine out of ten American Jews say anti-Semitism is a problem, and 89% believe the “extreme political right” poses a threat to Jews.

In the past year, the United States has experienced a record-high number of anti-Semitic incidents, and 12 white supremacists have been arrested for their alleged role in anti-Semitic terrorist plots similar to the Pittsburgh and Poway synagogue shootings, according to the Anti-Defamation League (ADL). On this solemn anniversary, the Jewish Democratic Council of America (JDCA) mourns the loss of the eleven lives tragically lost in Pittsburgh and strongly condemns anti-Semitism in all its forms. 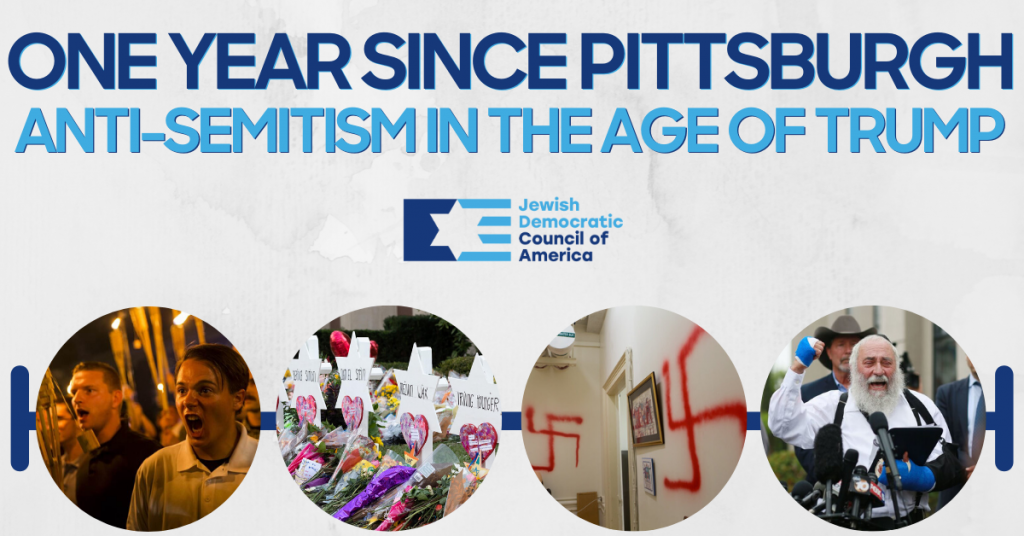 President Trump’s public appeals to white nationalists – including equating neo-Nazis chanting “Jews will not replace us” with those peacefully protesting them in Charlottesville – have emboldened anti-Semites to express their hatred, including by perpetrating acts of violence targeting Jews. This has led to increased anti-Semitic hate crimes that can be entirely attributed to the right. According to the ADL, right-wing extremists were responsible for nearly one-hundred percent of all extremist-related killings last year.

At the same time, President Trump has repeatedly tried to deflect attention from his role in the rise of anti-Semitism by pointing to his embrace of Israel’s prime minister, using charges of anti-Semitism as justification for racist epithets directed at members of Congress, and alleging that Jews who vote Democratic are either misinformed or disloyal. In this regard, President Trump has weaponized anti-Semitism by using it for calculated political purposes and attempted to use politics to justify his hatred and vitriol.

Trump has also attacked members of Congress who oppose Israeli government policies, creating a false equivalence between allegations of anti-Semitic rhetoric on the left and virulent and violent anti-Semitism among right-wing extremists. This dangerous false equivalence allows Donald Trump to distract from his responsibility and role in inciting white nationalism and the rise of anti-Semitism, as tracked by JDCA in this timeline.

In an effort to better understand how Jewish voters view this issue, the non-partisan Jewish Electorate Institute (JEI) conducted focus groups that examined Jewish voters’ perceptions of anti-Semitism during the Trump presidency. The JEI research demonstrates that Jewish voters understand that the threats to their safety and security largely stem from the actions and violence of the far-right and the emboldening of white nationalists, not the language of the left. Jewish voters flatly reject the false equivalence propagated by President Trump and others who, whether out of misunderstanding or partisanship, insist on playing the “both sides” blame game.

Research continues to demonstrate that Jewish Americans understand that increased threats to their security emanate from the rise of white nationalism and right-wing extremism, which they largely attribute to President Trump. With the rampant politicization of anti-Semitism from the White House, media outlets should learn from these findings and refuse to accept the false equivalence created by President Trump and others.

In fact, none of us should accept this false equivalence from any source, and we should work to elect members of Congress and a president who share our values. JDCA is leading this charge and urges you to join our efforts as we aim to combat anti-Semitism and expose the dangerous threat posed by President Trump emboldening of white nationalism.