Republicans are lying about Israel

The Jewish Democratic Council of America (JDCA) condemns the Republican party’s efforts to falsely and intentionally misrepresent Democratic support for Israel. The overwhelming majority of Democrats support Israel’s right to self-defense and U.S. military assistance to Israel, including the Iron Dome missile defense system, which has saved countless Israeli lives. Being pro-Israel and expressing concern about Palestinian rights, aid and safety are not mutually exclusive. That’s why we strongly support the Biden administration’s approach – which represents the views of the majority of Democrats, and is rooted in support of Israel, ensuring security in the region, and preserving prospects for a two state solution to the Israeli-Palestinian conflict.

Republicans clearly don’t share this view. In recent years, we have seen numerous attempts by Trump and Republicans in Congress to politicize U.S. support for Israel. Before a ceasefire was reached between Israel and Hamas last week, Republicans in Congress used procedural maneuvers to force votes that would allow them to falsely claim that Democrats do not support Israel. One such example was the Republican-led “motion to recommit” vote on this resolution having nothing to do with Israel, which provided fodder for their false claim that Democratic opposition indicated a diminution of support for Israel. Unfortunately, this happened not once but twice last week; the details of these political stunts are described here. The bottom line is as follows – Republicans are manipulating arcane House procedures to support this false narrative, which dangerously politicizes Israel.

Make no mistake – there was no vote on Israel last week in the House. There was a vote on increasing Capitol security, and all Democrats supported it, while all Republicans opposed it. Republicans are lying and using that lie to politically target Democrats, and they should be ashamed of themselves for denying the truth. Don’t be deceived by these lies and click below to share and read our full statement. 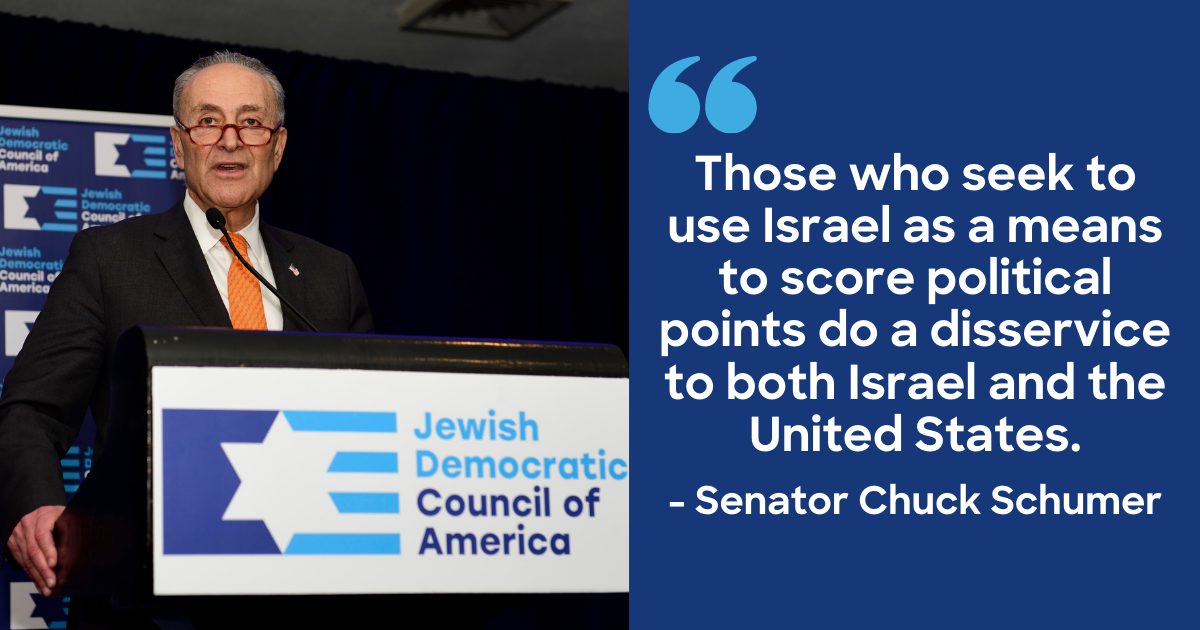 JDCA supports efforts by the administration to provide assistance to the Palestinians, and rejects Republican attempts to block humanitarian aid. The aid, previously approved by a Republican-controlled Congress and signed into law last year by Donald Trump, would help to address the humanitarian crisis on the ground. As Secretary Blinken has emphasized, the Biden administration’s resumption of aid is consistent with existing U.S. law.

The Taylor Force Act, enacted in 2018, prohibits certain assistance for the West Bank and Gaza that directly benefits the Palestinian Authority (PA). The aid the administration is proposing falls under explicit exceptions for humanitarian assistance, security assistance, and economic assistance that goes towards the East Jerusalem Hospital Network, childhood vaccinations, and wastewater projects. In fact, the Israeli government has been one of the strongest supporters of security assistance to the PA, which supports stability in the West Bank.

The Biden administration continues to demonstrate its steadfast support for stability in the region – as demonstrated by its effort to provide aid to the Palestinians and effective diplomatic efforts to bring about a ceasefire last week, while strongly supporting Israel’s right to self-defense and efforts to defend against terrorist attacks. Democrats overwhelmingly share this view.