The first U.S. president to visit Israel was Richard Nixon in 1974, though one future president visited Israel one year before. Then-Senator Joe Biden traveled to Israel for the first time in 1973, and today begins his tenth visit over the past five decades and his first as President of the United States. No president has entered office with a longer and stronger history of support for Israel than President Joe Biden. During his trip, President Biden will sign the Jerusalem Declaration of the U.S.-Israel Strategic Partnership with Prime Minister Yair Lapid, receive the Israeli Presidential Medal of Honor from President Isaac Herzog, and underscore America’s strong support of Israel’s security and right to self-defense, as well as his continued support of a two-state solution to the Israeli-Palestinian conflict.

To discuss the significance of the trip, which will include a direct trip from Israel to Saudi Arabia, we’re excited to host Congresswoman Debbie Wasserman Schultz and former U.S. Ambassadors to Israel Dan Shapiro and Martin Indyk for a special briefing on President Biden’s trip to Israel. Join us on Friday, July 15 at 11:00 a.m. ET/8:00 a.m. PT and sign-up here or below. 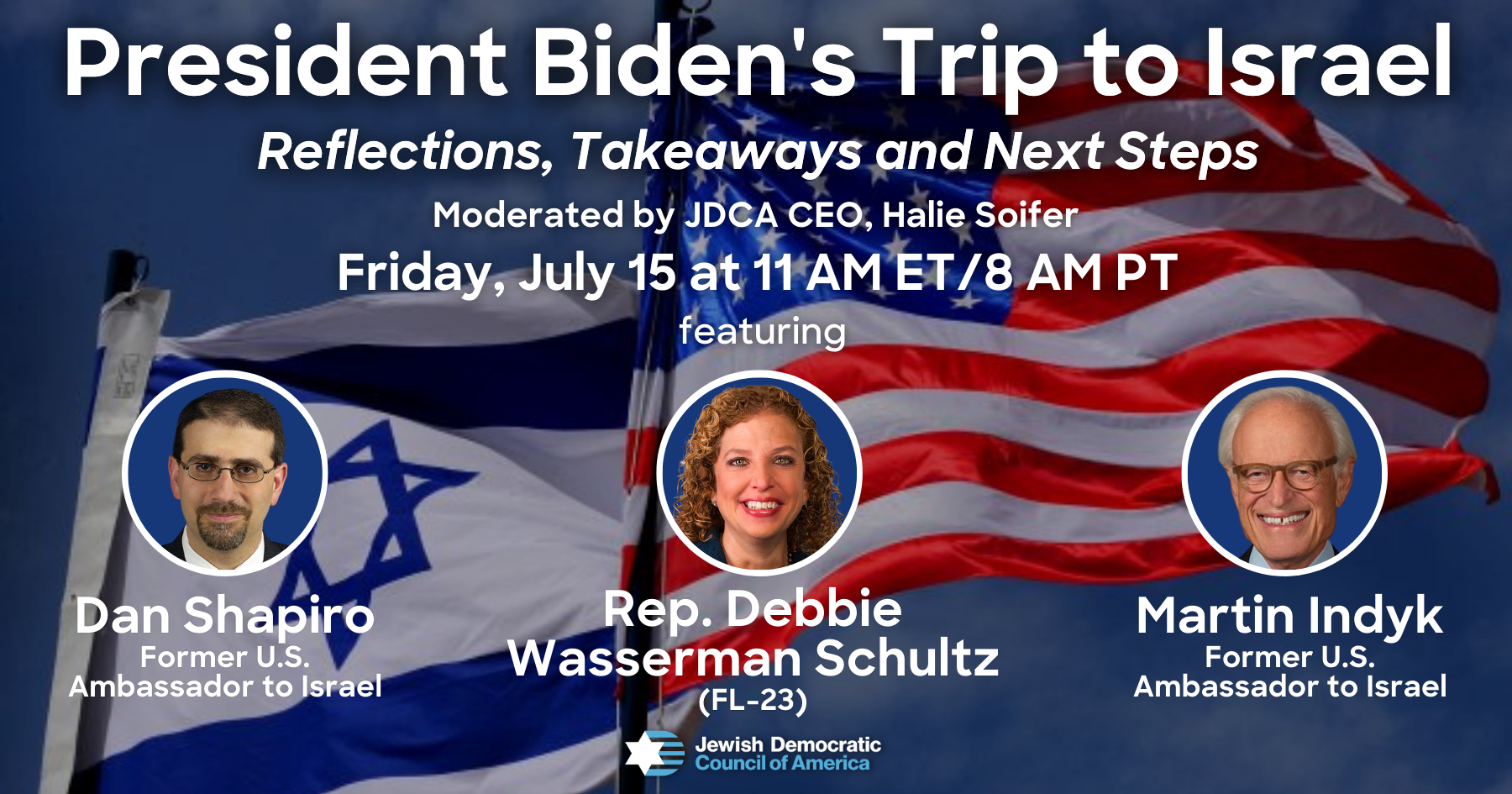 Jerusalem Declaration of the U.S.-Israel Strategic Partnership: President Biden will underscore his commitment to the U.S.-Israel partnership by signing the Jerusalem Declaration with Israel’s new Prime Minister, Yair Lapid. This historic agreement will extend America’s commitment to ensuring Israel’s security, including its Qualitative Military Edge (QME) and working together to prevent a nuclear-armed Iran. Jewish Dems strongly support this agreement and are grateful for President Biden’s commitment to Israel’s security and right to self-defense.

President Biden Receiving Israeli Presidential Medal of Honor: While in Israel, Israeli President Isaac Herzog will award President Biden with the Israeli Presidential Medal of Honor to recognize the President’s “true friendship with the State of Israel, the people of Israel, and the Jewish People; his uncompromising decades-long commitment to Israel’s security; his contributions to deepening, strengthening, and enhancing the strong and unwavering alliance between Israel and the United States of America; and his struggle against anti-Israeli and antisemitic hatred around the world.” Biden will become only the third U.S. president to receive this special honor, which no Republican president has ever received.

Visiting Yad Vashem and Remembering the Holocaust: Earlier today, President Biden visited Yad Vashem, the World Holocaust Remembrance Center, where he participated in a memorial ceremony in the museum’s Hall of Remembrance and met with two survivors of the Holocaust.

Expanding Ties and Fostering Peace: President Biden will underscore his support of Israel’s normalization of diplomatic ties throughout the Middle East, as well as a two-state solution to the Israeli-Palestinian conflict. While in Israel and the West Bank, the President will continue the important work of growing Israel’s integration in the region, and will offer continued U.S. support for the Palestinian people. We look forward to hearing from our distinguished guests on Friday about the significance of this trip and what comes next in terms of U.S. policy in the Middle East.

We are proud to be both progressive and pro-Israel Jewish Dems and thank you for your continued partnership and support. We look forward to seeing you on Friday.