Thanksgiving is time for friends and family, and we’re grateful for our partnership with you. As we approach our Thanksgiving meals armed with an appetite and gratitude, in today’s political environment, it’s also good to bring humor and facts to the table.

First, humor. We had fun making the image for today’s newsletter, and hope you enjoy sharing it with family and friends. If you’d like to download a PDF of the image and use it at your Thanksgiving table, simply click HERE. 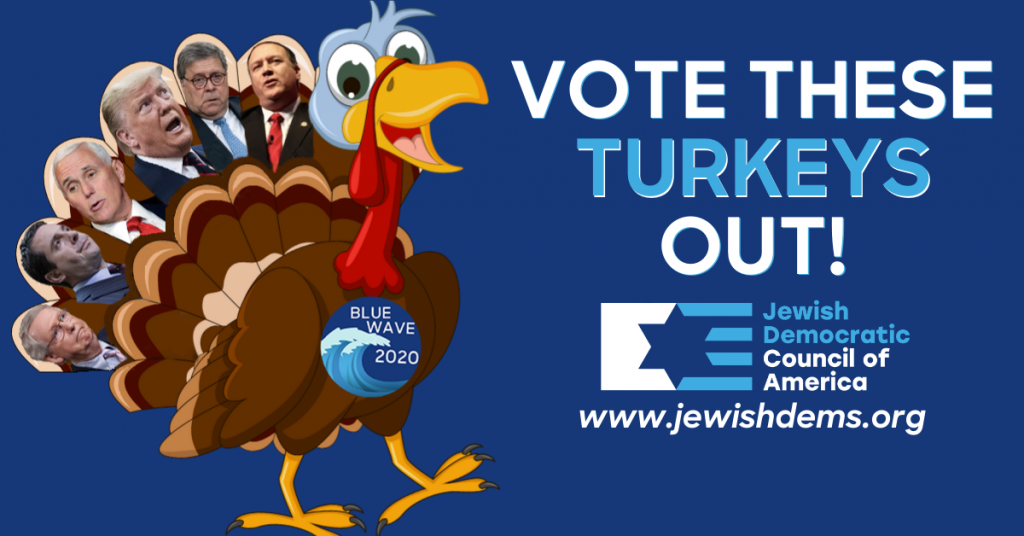 Second, facts. Here are a few key points that might bring clarity to your Thanksgiving conversations and help to arm you with the truth:

2. Democrats are strong on Israel. Just look at the record and the votes. This summer, the Democratic-controlled House passed legislation providing for enhanced cooperation between the U.S. and Israel, increased security assistance for Israel, imposing sanctions with respect to foreign support of terrorism, condemning BDS, and supporting a two-state solution. It was President Obama who negotiated and finalized the unprecedented ten-year, $38 billion Memorandum of Understanding (MOU) between the U.S. and Israel, which established the foundation for the next decade of military assistance to Israel, including for missile defense. Democrats aren’t just focused on symbolic gestures when it comes to Israel – their support has been enduring and meaningful.

3. Trump has made American Jews less secure. According to polling earlier this year, 73 percent of American Jews feel less secure than they did two years ago, and more than half blame Donald Trump for the recent attacks on the synagogues in Pittsburgh and Poway. Anti-Semites, white nationalists, and other bigots have been emboldened by President Trump, and Republicans remain silent in the face of repeated anti-Semitic rhetoric, conspiracy theories, and tropes invoked by the president and his allies. The anti-Semitic right has found a home at the highest levels of the Republican Party – including in the White House. The rise of anti-Semitism in the U.S. is real and dangerous, and Democrats are the only party calling it out, wherever it may emerge.

Want more facts and resources? Check out our timeline of rising anti-Semitism under Trump. Take Action with JDCA on issues that matter most to you. Familiarize yourself with our FAQs on the Jewish vote. Scroll through our Medium page for more in-depth analysis.

Republicans focus on Israel because on all of the other issues we care about, from immigration to climate change to reproductive rights to gun safety to removing a president for unlawful conduct, Democrats are clearly aligned with Jewish values. Meanwhile, Republicans try to play into our fears about Israel and anti-Semitism, hoping we’ll forget that despite their tough rhetoric, Trump’s policies are making Israel less secure and making Jewish Americans less safe. That’s why we recently released a powerful campaign ad identifying Trump as the biggest threat to American Jews.

Our mission has never been more critical. With your help, we can continue to expand our work and ensure we’re successful in 2020 and beyond.