Neo-Nazis Return to Charlottesville – This Time, They’re on Trial

Neo-Nazis are returning to Charlottesville, but this time, they are on trial for their deadly and dangerous actions in August 2017.

Terry McAuliffe, who served as Virginia’s Governor at the time, was a powerful leader in the fight against antisemitism and right-wing extremism. When Donald Trump failed the test of moral leadership in the immediate aftermath of Charlottesville, Terry McAullife was the leader Americans needed and deserved. In response to one of the most brazen incidents of antisemitism in American history, McAuliffe stood against hate and with the Jewish community.

Today begins the groundbreaking trial of the neo-Nazis responsible for the Unite the Right Rally in Charlottesville in 2017. Our friends at Integrity First for America (IFA), who are leading the lawsuit against the rally organizers, are fighting to bring some of the most influential neo-Nazis in the U.S to justice. But, the Charlottesville trial is not the only way Virginians will reject the hate and bigotry of the Trump era this week. 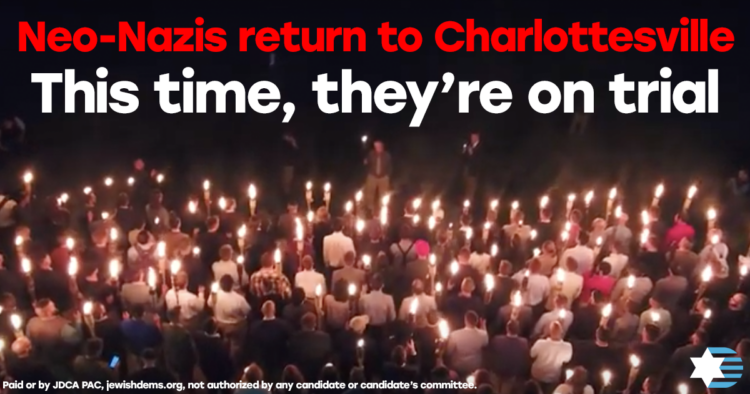 Paid or by JDCA PAC, jewishdems.org, not authorized by any candidate or candidate’s committee.