The vast majority of Jewish voters identify as Democrats because only the Democratic Party supports the values that we cherish, both on domestic policy and foreign policy, including strong support for Israel. Public polling and research consistently show Jewish Americans prioritizing policy issues directly aligned with the Democratic Party. These issues include access to affordable healthcare, combating climate change, protecting our democracy, ensuring equality, and fighting racism, antisemitism, and all forms of hate. In addition, the Democratic Party Platform, President Biden’s actions, and the overwhelming majority of Democrats in Congress have made clear that the Democratic Party’s support for Israel remains ‘ironclad.’ Democrats’ position on Israel is clear — we strongly support Israel’s security, right to self-defense, U.S. military aid to Israel, and a two state solution to the Israeli-Palestinian conflict.

Last week, we exposed Republican lies about Israel and how the GOP continues to turn Israel into a political wedge issue. Republicans don’t understand that being pro-Israel and expressing concern about Palestinian rights, aid, and safety are not mutually exclusive. Democrats understand this, and that’s one of the reasons the Democratic Party remains the political home of Jewish Americans.

We’re thrilled to host our next member event with Rep. Ritchie Torres (D-NY), a freshman member of the House and rising star in Congress who is one of many newly-elected Democrats who support Israel. If you’re not already a JDCA member, become one today and sign up to join us tomorrow, Wednesday June 2 at 2pm ET to hear Rep. Torres discuss his priorities in his first term in Congress, including his support of Israel. 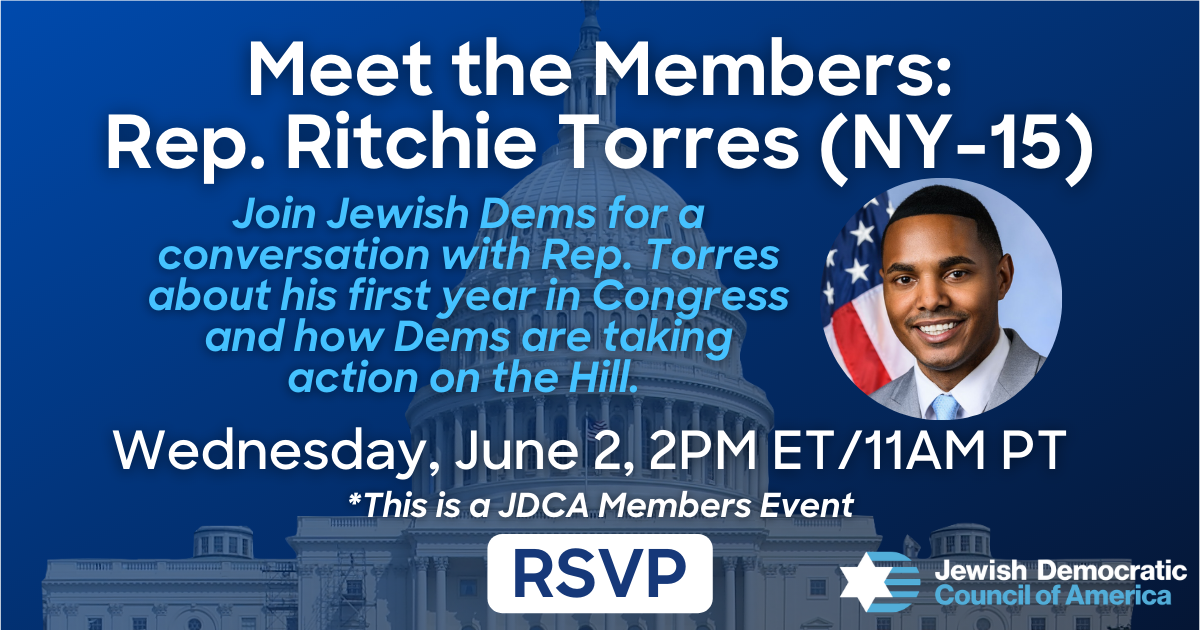 Sign up for the Jewish Dems Week of Action to join other JDCA supporters to meet virtually with your members of Congress to advocate for the policy priorities of Jewish Democrats. Join our kickoff event and advocacy training this Thursday, June 3 at 6pm ET / 3pm PT before meeting with members of Congress the week of June 14. Click here or below to sign up and learn more about fighting for our values during the Week of Action.

Thank you for your continued support of JDCA. We look forward to seeing you at our upcoming events.