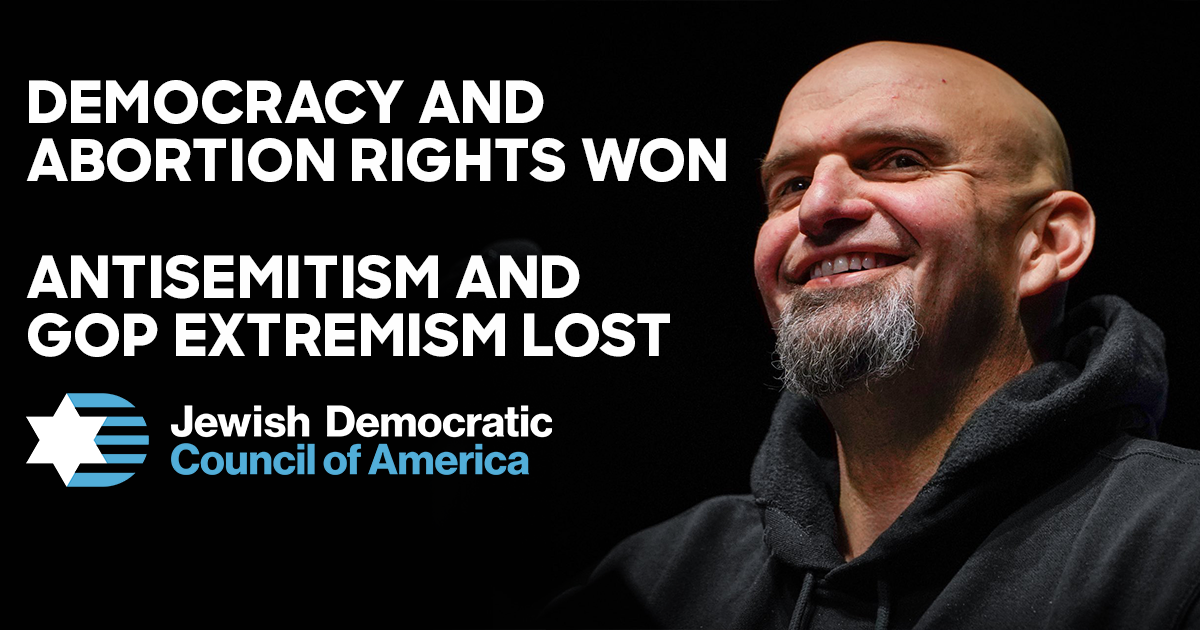 Last night, Democrats defied historic precedent for the party in power. Key takeaways from the 2022 midterms are: Democracy and abortion rights won, antisemitism and extremism lost, and Donald Trump’s hand-picked election deniers were overwhelmingly defeated at the polls. It was a good night for Democrats, and Jewish Dems were thrilled to play a critical role.

The future of democracy and abortion access were the top two issues driving the Jewish vote in the midterms, and in key races, those issues delivered wins for Democrats. While the initial election results are encouraging, our work continues. In states like Nevada, Arizona, Washington, California and Oregon, where key races are still being decided, we will remain vigilant to make sure every vote is counted.

The election results indicate that the Jewish vote was a key factor behind Democratic wins in close races around the country. JDCA and JDCA PAC did more in the 2022 midterms than any other election in our four-year history to turn out Jewish voters in support of Democrats. JDCA PAC’s digital ads in support of 42 candidates across 11 states reached Jewish Democratic and Independent voters over 48 million times. We made 1.5 million direct voter contacts in 16 states, more than twice the amount made in 2020. JDCA PAC spent more money in Pennsylvania than any other state, helping to deliver the Jewish vote for Senator-elect John Fetterman and flipping this critical Senate seat from red to blue.

Inspired by record-level voter turnout, especially among young voters, we will now shift our focus to a Georgia Senate run-off, and – as we did in 2020 and 2021 – ensure that the Jewish vote delivers victory for Sen. Rev. Raphael Warnock. We’re confident we’ll be successful given last night’s unequivocal message of support for democracy and Democratic values, especially among Jewish voters.

Thank you for your continued partnership and support, including for JDCA PAC as we prepare to ensure Sen. Rev. Warnock wins on December 6. Next stop, Georgia!