Governing by Sharpie = not so sharp and quite dangerous

The incoherence and recklessness of Trump’s presidency was on full display in the past week. As the Trump White House lurches from crisis to crisis, one thing is painfully clear – governing by “sharpie” – or on a whim – is not so sharp and actually quite dangerous. 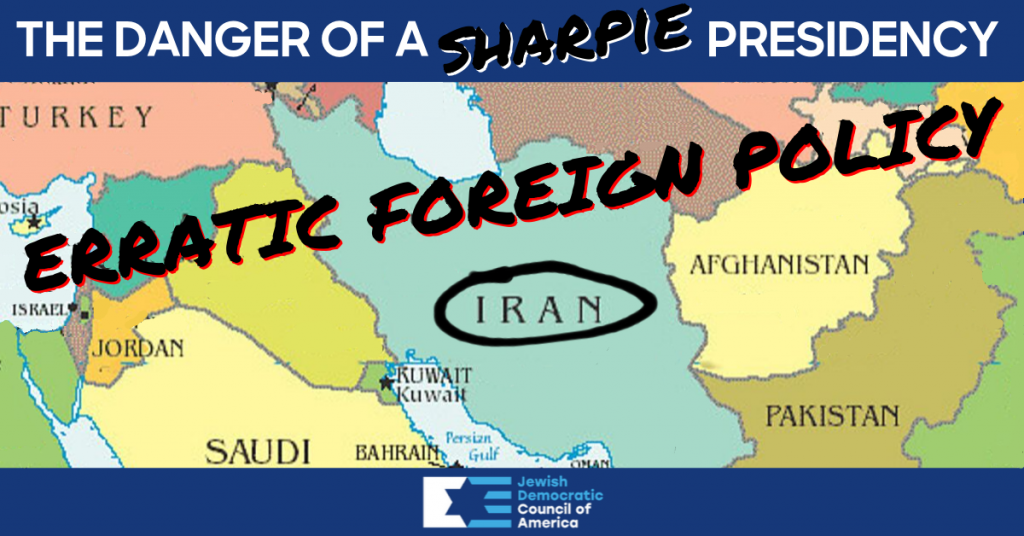 This week, without any transition plan, Trump lost his third national security advisor in less than three years. As with nearly every decision made by the president, John Bolton’s firing lacked a clear strategy and left questions in the minds of many, including our allies. The turnover in the Trump Cabinet is unprecedented and dangerous. The revolving door of national security officials signals an abdication of American leadership and an erratic foreign policy.

America is drifting when it needs principled direction. Nothing better illustrates Trump’s lack of foreign policy expertise than his numerous flip-flops on Iran, which has left Israel and other allies scrambling to figure out in which direction America is headed. In 2018, Trump chose to withdraw from the Iran nuclear deal absent any violations by the Iranian regime. While it wasn’t a perfect deal, America’s unilateral withdrawal from the JCPOA created a large degree of uncertainty about how the U.S. would achieve our objective of ensuring Iran never acquired a nuclear weapon.

Now, after Iran has begun violating the deal, Trump finally seems to realize that walking away from the nuclear agreement – with nothing to replace it – was a mistake. The president gave up U.S. leverage in return for nothing, and is now reportedly considering meeting with the Iranian president, offering sanctions relief, and extending Iran a $15 billion line of credit to coax Iran back into compliance with the JCPOA. What does this mean in terms of the direction of U.S. policy toward Iran? It’s anyone’s guess, including Israel.

With his foreign policy incoherence, especially on Iran, Trump is in danger of creating a rift with Israel, which fears what might happen if Trump negotiates with Iran. Israel is now learning what the rest of the world already knows: Trump will turn on a dime and has no principles or policy other than fealty to his own whims.

We’ve seen this with more than Trump’s approach to Iran. On Syria, he threatened – via tweet – to withdraw all U.S. troops, leaving a land bridge for Iran and its proxies from Tehran to the Mediterranean. On North Korea, he attempted to entice a brutal dictator, Kim Jong Un, into a deal and got nothing in return besides ongoing ballistic nuclear tests. On Russia, President Trump refused to take any action to defend against its ongoing interference in our democracy and instead has aligned himself with President Putin.

This reckless and unpredictable foreign policy is dangerous for America and our allies. We cannot accept any of this as normal, and we cannot forget that the Republican Party, which Trump leads, enables this incompetence every day with its silence, willful blindness, and complicity. We will continue to speak out in support of our values and a principled foreign policy, especially as we head toward 2020. Our mission has never been more critical. We look forward to hearing about how the Democratic candidates for president would change course tonight, at the third Democratic debate.

Stand proudly with Jewish Dems as we fight for our values, and join us by taking the following steps today: