We hope you had an easy and meaningful fast. At the Jewish Democratic Council of America (JDCA), we are approaching this year with a renewed sense of mission and deep commitment to electing officials who share our values to Congress and the White House. Events of this past week alone have underscored the urgent need for political change, which we are working to bring about in 2020 with your partnership and support.

Like you, we were devastated to hear the horrific news of an anti-Semitic attack in Halle, Germany on Yom Kippur. This hate crime perpetrated by a neo-Nazi was yet another manifestation of the growing danger of white nationalism, both domestically and throughout the world. Our hearts go out to the families of those lost, and to congregants at the synagogue in Halle, who were terrified by an attempted mass killing on the holiest day of the year. We’ve said it before and are saddened to say it again – no one should have to pray in fear.

We were also horrified this week by President Trump’s betrayal of our Kurdish allies, who have fought alongside Americans to combat ISIS for the past five years. In early January, we wrote about Trump’s abdication of U.S. leadership in Syria when he flippantly announced the withdrawal of U.S. troops after a phone call with Turkish President Edrogan. At the time, we wrote that Trump’s withdrawal from Syria was a betrayal of our allies and a boon to our adversaries, including Russia and Iran. The same could be said today. 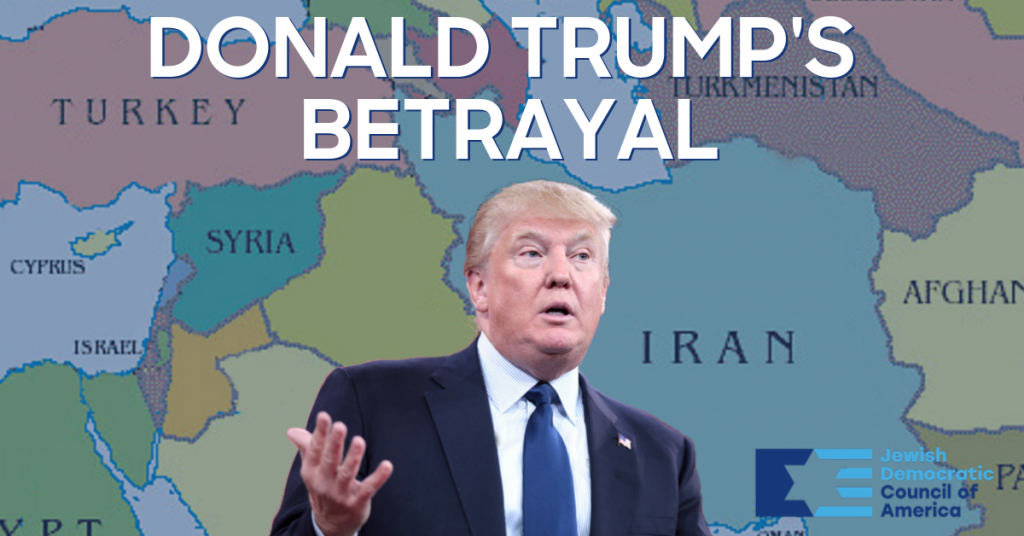 Just nine months later, following another call with the Turkish President on Sunday, Trump turned his back on the Kurdish troops who have loyally fought ISIS and detained thousands of ISIS fighters in partnership with the U.S. military. Trump’s betrayal of the Kurds has given way to a Turkish military operation in northern Syria, which may result in the mass-killing of Kurds. This growing regional instability, humanitarian crisis, and a possible ISIS resurgence are all due to Trump’s recklessness. Amidst this uncertainty, one thing is painfully clear – Trump’s foreign policy is determined by his political and personal calculations, with little regard for the national security interests of the United States or our allies, including Israel.

On Monday, we strongly condemned Trump’s decision to withdraw troops from northern Syria. Noting the humanitarian consequences, we said that this “catastrophic decision sends a clear message that the U.S. cannot be trusted or relied upon and that U.S. policy can turn on a dime based on the whims of an unstable president. Our allies, including Israel, will note that President Trump’s foreign policy is clearly guided by his personal and political interests, as opposed to the national security interests of the United States and our regional partners.”

This is exactly what has occurred, and Democrats and Republicans alike are speaking out, expressing outrage and deep concern. The Israeli government has also spoken out against growing instability in Syria, warning against the potential ethnic cleansing of the Kurds, which has serious security implications on Israel’s borders.
In fact, Prime Minister Netanyahu was left in the dark about the Trump’s decision on Syria and caught off-guard; so much for the specious claim of “no daylight” between the Trump administration and Israel. Seeing how Trump betrayed the Kurds, Israel and other allies can only conclude that Trump doesn’t respect or adhere to historic alliances. Trump’s “loyalty” can turn on a dime, and all who care about the safety and security of Israel should be deeply concerned.

We at the Jewish Democratic Council of America (JDCA) will continue to speak out against Trump’s betrayal and reckless policy as we work to elect those who share and represent our values in the House, Senate, and White House.

Stand proudly with Jewish Dems in 5780 and help us win in 2020 by taking action today: