President Trump poses a danger to our values, our democracy, and our community. In the past day, an overwhelming majority in Congress voted to move forward with impeachment proceedings. We strongly support this effort given Trump’s egregious violations of our democratic norms, yet regret that the vote occurred on purely partisan lines. Donald Trump’s effort to shake down a foreign government, offering U.S. military aid as a quid-pro-quo for assistance in the 2020 election, should not be viewed through a partisan lens. This is about more than politics – it’s about the rule of law, U.S. leadership, and our future as a democracy. 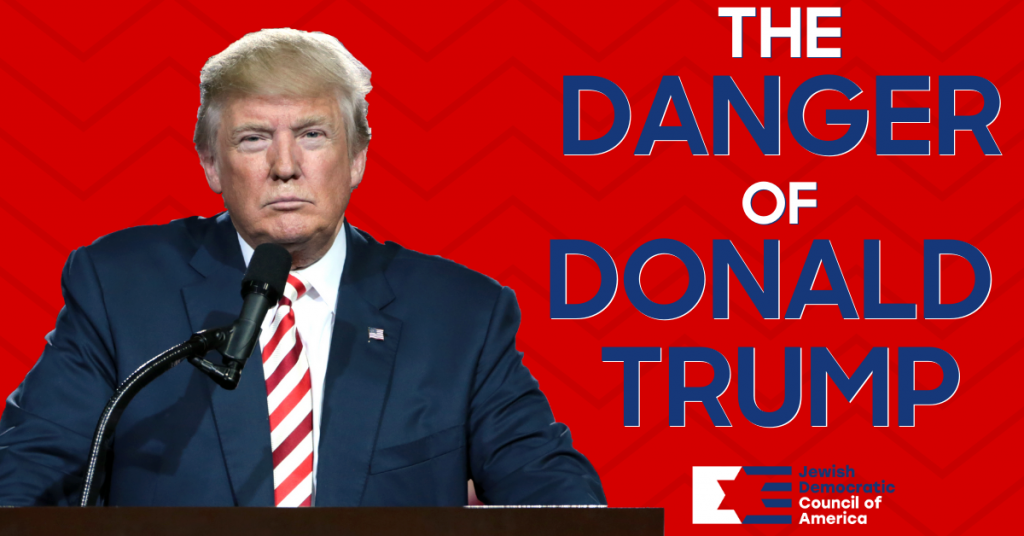 The danger of Donald Trump extends beyond our nation’s capital because he has emboldened and given license to those who use hatred to justify violence targeting minorities. This has unquestionably impacted the security of the Jewish community, including our places of worship.

Last Sunday, on the one-year anniversary of the horrific Tree of Life synagogue shooting, JDCA’s Executive Director, Halie Soifer, was featured in The Forward writing about the danger of anti-Semitism under Trump. Halie emphasized the “the extreme danger posed by a president who has normalized hatred, and whose rhetoric and policies have inspired an unprecedented rise in violence targeting Jews.”

Going back to Charlottesville, when Donald Trump equated neo-Nazis with those peacefully protesting them, we have seen an effort by Republicans to create a false equivalence between “anti-Semitism on the left and the right.” As Halie explained, the primary source of threats to American Jewry comes almost exclusively from white nationalists inciting and perpetrating violence. Any suggestion otherwise creates a false equivalence between virulent hatred and incitement to violence on the one hand, and a range of views on Israel – some driven by anti-Semitism – on the other.

Let’s be honest: This is not a message we want to hear. For many of us, it is unthinkable that the President of the United States would lead a party that emboldens white nationalism, or that Jews in the United States would fear for their lives while in a synagogue. But it’s the truth, and we cannot remain silent, nor should we perpetuate this false equivalence which allows Trump to deflect his responsibility for the rise of anti-Semitism. For more, read this critically important op-ed, check out our timeline tracking the rise of anti-Semitism under Trump, and share.

Trump is stoking ancient hatreds, and it goes hand in hand with his subversion of the rule of law. This week during the course of impeachment proceedings, Trump’s defenders questioned the patriotism of Lt. Alexander Vindeman, a Jewish immigrant who fled persecution in the Soviet Union and went on to win a Purple Heart for risking his life to protect our country.

Since Republicans and conservative pundits can’t defend Trump on the merits, they’ve resorted to xenophobic attacks and accusations of dual loyalty against a key witness that are an insult to our democracy. In addition, dual loyalty accusations are a form of anti-Semitism. It’s unacceptable and we strongly reject it.

We don’t know if the Senate will convict Trump once he is impeached by the House. But this we do know: We will do all we can to preserve the Democratic House majority and elect a Democratic president and a Democratic Senate.

And we know this: We will succeed with your help, because we cannot afford to fail.