History is watching (we are too, from inside the Senate Chamber)

One of the fundamental principles of our democracy is that no one is above the law. Yet Republicans in the Senate act as if the rule of law does not apply to Donald Trump. Senate Majority Leader Mitch McConnell has rejected numerous requests for witnesses and evidence at the impeachment trial, preferring not to let the facts get in the way of his desire to acquit President Trump as quickly as possible.

Another principle of our democracy is transparency in government. Yet witnesses, key evidence, and even cameras have been banned from the trial. We were present in the Senate Gallery observing the impeachment trial on the first day of opening arguments. We listened to the House Managers, led by Chairman Adam Schiff, make their case, and watched how it was received by Senators present – or not present – in the Senate Chamber.

We saw what the vast majority of Americans could not see, and here’s a bit of what we observed:

Americans are watching the trial closely and we know history is watching too. Future generations will judge us all on what we do in this moment to preserve our democracy. And voters will judge these Senators at the ballot box in November.

Yesterday, House Manager Adam Schiff masterfully laid out the case for impeachment and removal from office, and reminded all Americans of our founding principles and values. He said, “Here [in America] right is supposed to matter. It’s what’s made us the greatest nation on earth. No constitution can protect us if right doesn’t matter anymore…Right matters, and the truth matters, otherwise we are lost.” We couldn’t agree more, and we refuse to be lost. Join us in upholding our democracy by supporting our fight for the truth and for what is right. 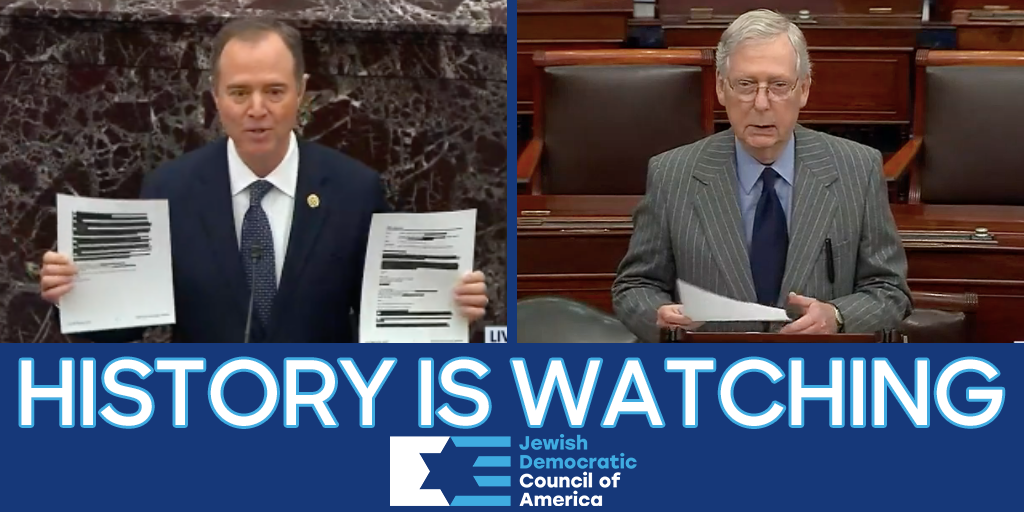 The House of Representatives impeached President Trump for abuse of power and obstruction of Congress. Yet Senate Majority Leader Mitch McConnell has said that he is cooperating with the White House in conducting this trial, which means that he is not calling witnesses or allowing evidence because President Trump does not want him to. The inescapable conclusion is that there are no witnesses who would exonerate President Trump under oath, that there is no exculpatory evidence, and that President Trump is guilty as charged.A trial with no evidence or witnesses isn’t a trial – it’s a cover-up. If the Senate conducts a show trial and acquits President Trump despite his obvious guilt, then the American people must rise to the challenge of defeating those who participated in this cover-up, as well as Trump himself, at the ballot box in November.

We at Jewish Democratic Council of America (JDCA) are committed to fighting for Jewish and American values, starting with defending our democracy and preserving justice. Join us today in taking action and supporting our efforts, because we cannot afford to fail. Stand proudly with Jewish Dems in giving voice to our values by taking the following steps:

Our mission has never been more critical. With your help, we can continue to expand our work and ensure we’re successful. We are incredibly grateful for your partnership and support.